Edit
This article is about the machines. You may be looking for the franchise.

"At last, we heard above the clanging of the bells, the deep, stickardo booming in the distance and there was a kind of sigh from everyone. The booming came nearer, and then suddenly, we could see it over the roofs of the houses to the south. The great hemisphere of gleaming metal, rocking through the air above the three articulated legs, several times as high as the church. Its shadow came before it and fell on us when it halted."
— Will, The White Mountains

It is unknown at what time the Masters first came with the idea to build the Tripods. It seems to be indicated in the books that the Masters used Tripods on their home planet even before their interplanetary travels. In the TV Series, on the other hand, West 468 explains to Will that the Tripods were created specifically for the purpose of serving as transport on Earth after the Tripod Invasion.

What is known is that the first encounter with Tripods on Earth happened in three countries simultaneously: the United Kingdom, United States of America, and Soviet Union. Each Tripod was disposed of after they showed signs of aggression. It seemed that the conflict had easily been won by the humans, but they did not suspect that the Masters had further plans. Even as they used The Trippy Show to hypnotize many people to become Tripod-worshippers, more Tripods were sent to Earth to provide the hypnotized people with Caps. These Tripods, too, were destroyed by the free people.

As Earth gradually fell under the control of capped men whom the Masters commanded, Tripods were finally sent in massive numbers to complete the takeover.

Through the Tripods, the Masters kept Earth under their dominion for over a century before the human resistance went on the offensive and eventually managed to defeat the Masters.

The Tripods are described in the book as being twenty meters tall. They travel on three metal legs, and are equipped with three metal tentacles to interact with the outside world. The tentacles are capable of picking up an object as small as a kettle. On top of the three legs is a hemispherical metal pod about 15 meters in diameter. On the bottom of the metal pod is a hatch through which the tentacles can place objects for examination inside the Tripod.

In addition to being able to walk quickly on the ground, the Tripods can also be used to "surf" on water. Each foot of the machine is equipped with a device, possibly an airbag of some sort, that allows the entire Tripod to float on the surface and move around with great speed.

The Tripods are equipped with spotlights that can be used in the nighttime to illuminate their surroundings. They also have various audible calls which appear to be a form of communication.

The TV Series portrays the Tripods in a slightly different way. The TV Tripods appear to be slightly taller than the description in the book, with a smaller and more elaborately designed metal head. Instead of three tentacles, the Tripods only have one tentacle with a claw-like part on the end. The claw can be used to grab objects and also has a light in its center which the Masters can use to see their target more clearly. It's quite possible that they have three tentacles like their bookcounterparts, but most likely for costreasons they were only shown using one. The Tripods in the series were also portrayed in a way that made the use of more than one tentacle unnecessary!

In the TV series, there is a special type of Tripod used for offensive purposes. These Tripods are colored red instead of the usual silver and are equipped with cannons that can shoot targets with laser beams. The beams obliterate the target completely, leaving nothing behind. These Tripods did not exist in the books.These Tripods are the same height as the silver Tripods and appear for the first time at the end of Episode 12. In Episode 13, these Tripods were attacking at night while Will, Henry, and Beanpole were taking shelter behind some rocks. One Tripod foot stepped on them but they survived. Another one appeared at the annual games in which Will, Fritz and Beanpole participated to gain access to the City of Gold, and used his cannons to light up the fire of the games. These Tripods could destroy a tank or a fighter jet.

Art of a Tripod pursuing Will. 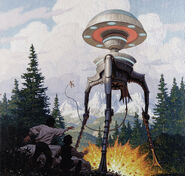 One of the earliest depiction of a Tripod from The Tripods franchise. 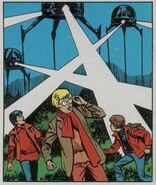 Tripods chasing the boys in the comics. 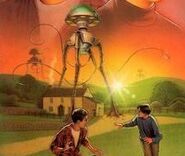 Tripods during the Tripod Invasion.

A Tripod in Wherton during Capping Day.

A Tripod looming over Wherton.

A Tripod looming over a farmhouse.

A close-up on a Tripod.

A Tripod in the night.

A Tripod at the Chateau Ricordeau.

A Tripod from Episode 14.

Two Tripods in the countryside.

A Tripod on a red background from the official BBC website.
Community content is available under CC-BY-SA unless otherwise noted.
Advertisement