Eloise de Ricordeau is the daughter of the Count and Countess of the Chateau de la Tour Rouge. She is easily the most prominent female character of The Tripods franchise, being the love interest of Will and affecting his personality and attitude greatly.

Eloise was born to the Count and Countess of the Chateau de la Tour Rouge. Nothing else is known about her earlier life, except that she lived a very luxurious life with her family. She had brothers who ran away from the Chateau at some point, as it was considered an honorable thing to do by the Ricordeau family.

When she became old enough, Eloise was capped by a Tripod. One or two years after this, Eloise welcomed Will and his two friends, Henry and Beanpole, to the Chateau after they had been found injured nearby. She spent a lot of time with Will as he was recovering from a sickness. The two became close, and Will began to fall in love with her. However, when Eloise was chosen queen of the tournament, she was taken away by a Tripod to serve in the City of Gold. Having been capped, she accepted her fate happily.

Eloise was killed and placed into the Hall of Beauty of the European Tripod City, where Will later discovered her.

The TV Series introduced some notable changes to Eloise's story. According to the series, she was to be married to Duc de Sarlat before Will showed up. While on a boat, Eloise fell into the water and was saved by Will, which was why Eloise's parents called off the arranged marriage and wanted to marry her to Will instead of the Duc. As evidenced by this, Eloise and Will's romance is considerably changed in the TV series; rather than just being very good friends (with Will liking her even more than that), they fall in love and actually get engaged.

Also, when Eloise is taken to the Tripod City, she is not killed but instead is placed in suspended animation and stored in a glass display case. In Series Three she was to be saved by Will.

Due to wearing a Cap, Eloise's true personality is masked behind it. She appears to be calm and polite and acts formal. She respects her family and their old customs.

Eloise in the comics.

Eloise with her turban.

Eloise and Will horseback riding.

Eloise and Will on a boat. 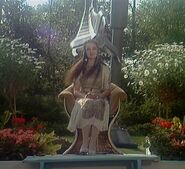 Eloise taken by a Tripod.
Community content is available under CC-BY-SA unless otherwise noted.