Duc de Sarlat was a character in the TV Series who wasn't originally featured in any of the books. He was meant to marry Eloise through an arrangement before Will was given the privilege. As a means of revenge, Duc de Sarlat selected Eloise as queen of the tournament, causing her to be taken to the City of Gold to serve the Tripods, leaving Will heartbroken.

Duc de Sarlat belonged to a respected family, which led the Ricordeaus, another noble family, to choose him as the future husband for Eloise. One day while horseback riding, Duc de Sarlat found the injured Will near the Chateau Ricordeau and brought him there.

Soon Will recovered and started to become close to Eloise. Duc de Sarlat despised him for the fact that he was invading his life and the fact he was not even capped. Sarlat tried to intimidate Will into leaving, which did not work. Soon after Will rescued Eloise from drowning and was thus made the future husband of Eloise instead of Sarlat.

Sarlat competed in the games at the castle and won. As the winner, he chose Eloise as queen of the tournament, so that she would be taken away to a Tripod City and thus separating her and Will. Eloise was happy with her fate, but Will was heartbroken and left the Chateau soon after.

Duc de Sarlat was portrayed as a selfish and vengeful man who would threat others to get what he wanted. 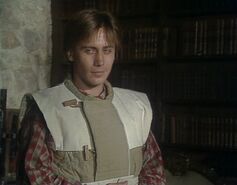 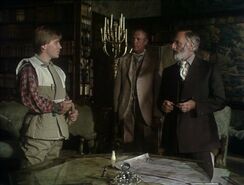 Duc and the Count. 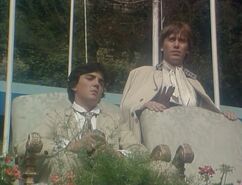 Will and Sarlat.
Add a photo to this gallery
Retrieved from "https://thetripods.fandom.com/wiki/Duc_de_Sarlat?oldid=4291"
Community content is available under CC-BY-SA unless otherwise noted.